Award-winning recording artist Rachael Sage is proud to debut this moving lyric video for her song "Loreena". The animated film was crafted by Honolulu based visual artist Dan Paul Roberts and his protégé, Jazmine Uyehara. This is the first lyric video from Sage's new album, Choreographic, which was released May 20th. The audio for "Loreena" originally premiered on Curve Magazine.

Inspired by the dance theme of Sage's new album, video creators Dan Paul and Jazmine pieced together a storyline drawn from the lyrics of the song. After that, Dan Paul worked on the storyboards while Jazmine oversaw character design and thematic development. The both created the finished illustrations.

In the wake of the tragic events in Orlando this past June, independent record label MPress Records' artists Rachael Sage, Seth Glier and A Fragile Tomorrow wanted to do something to help the families of the victims and the LGBT community. The New York-based label has organized a special fundraising EP "Songs For Orlando", featuring three new tracks: "Disarm Distrust" by Rachael Sage, "Before the Fire Fades" by Seth Glier and "49 Pulses" by A Fragile Tomorrow. The album is available now via Noisetrade for a pay-what-you-want donation. 100% of the tips will benefit The GLBT Community Center of Central Florida & OneOrlando.

Rachael Sage Breaks Into The Top 10 at #6 on AC Radio Chart! 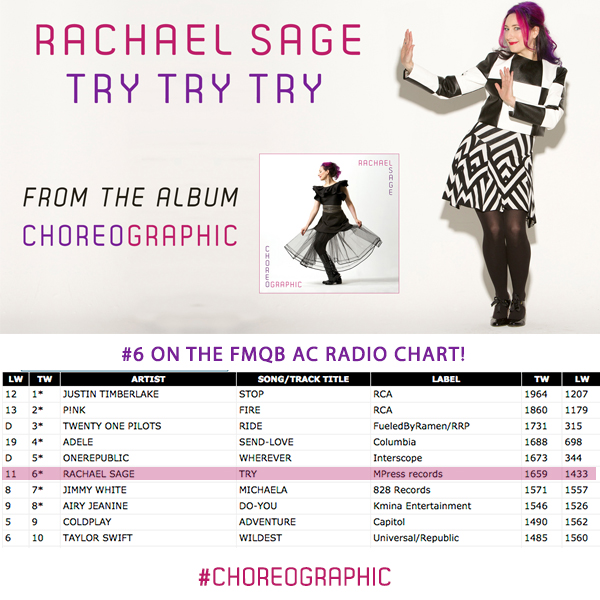 Rachael's single "Try Try Try" has made an impressive climb up to #6 on the FMQB Adult Contemporary chart. She shares a spot in the top 10 with heavy-hitters Taylor Swift, Coldplay, Adele, P!nk and Justin Timberlake!

We are thrilled to share our newest addition to the MPress Family! New punk-rock collaboration Cashout featuring Sean and Brendan Kelly from A Fragile Tomorrow and Matt Megrue. Their EP "Scam.Sin.Fear" is available now on iTunes.

Check out the lyric video for their first single "Donnie Chump"

New York, NY: In the wake of the tragic events in Orlando this past June, independent record label MPress Records and flagship artist Rachael Sage wanted to do something to help the families of the victims and the LGBT community. The New York-based label has organized a special fundraising event: Rachael Sage & Friends – A Benefit For Orlando, to benefit The GLBT Community Center of Central Florida. The event will take place at Rockwood Music Hall Stage 3 (185 Orchard Street) on Tuesday, August 2nd at 8:15pm. Sage will be joined by special guests Grammy® nominee Seth Glier, along with Brooklyn-based artist Matt Nakoa & Michelle Citrin. 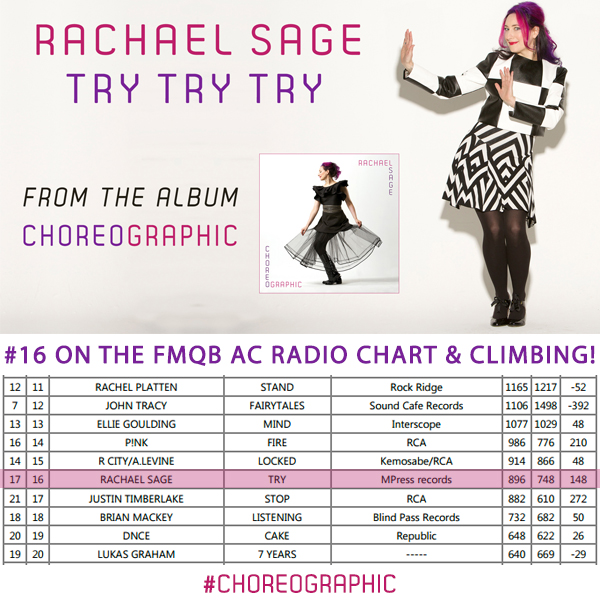 Rachael's first single "Try Try Try" was serviced to AC (Adult Contemporary) radio in April and has had a steady climb up the chart through the month of May clocking in at #50, then #35. In June, we saw a huge jump to #11, alongside P!nk, Rachel Platten, Justin Timberlake & Ellie Goulding (up 86 positions from #97 in its debut week). The album is also spinning on over 130+ Triple A & College Stations all over the U.S. & Canada!

Rachael Sage Releases Official Video For "I Don't Believe It"

PopMatters just premiered the video for Rachael's inspiring single "I Don't Believe It." Featuring up-and-coming dancer Kaci King, the video explores themes of empowerment and self-confidence through a variety of styles of dance including ballet and tap.

"An uplifting and powerful piece of music...picks you up, dusts you off and tells you that the bullies were wrong and aims to show one how much self-worth they have and how much they have to offer the world." - PopMatters

Rachael Sage's "Try Try Try" has hit No. 35 on the FMQB Adult Contemporary radio chart, among heavy-hitters like Adele, Taylor Swift, Kelly Clarkson and more! Thanks for all of your support! Be sure to keep listening, and keep requesting the song at your local station!

Rachael Sage's new album "Choreographic" is available now! To celebrate it's release, Rachael is sharing a new video epk, where she discusses the process behind the dance-inspired album.

Rachael's first single "Try Try Try" was serviced to AC (Adult Contemporary) radio, and has quickly climbed to #50, alongside Elle King, Rachel Platten, & Ellie Goulding (up 47 positions from #97 in its debut week).

Call your local station and request the song! Find out more here.